What is a Web API? – Reich Web Consulting 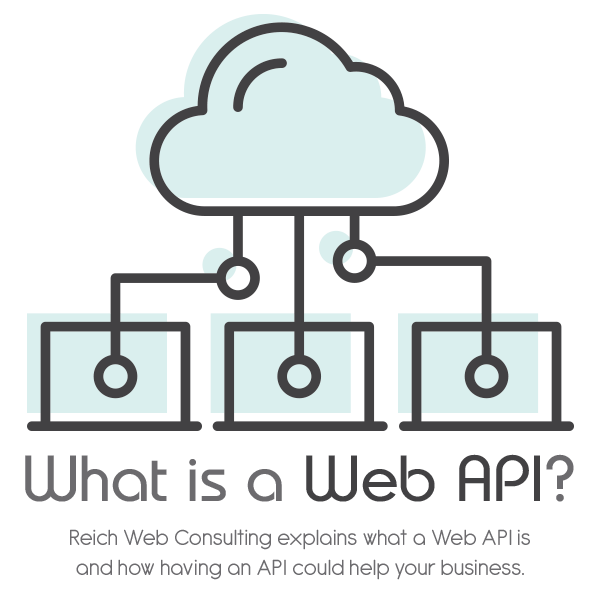 What is a Web API?

A Web API is a service that communicates over standard web protocols and sends and receives data in a pre-defined format.

There are three components to this definition that matter: it’s a service, uses web protocols, and communicates in pre-defined formats. Let’s unpack each one.

A Web API is a Service

Most web API’s exist to serve data to something, whether it be a person, a mobile app, or even another API. They don’t do much unless something asks them to.

An API consumer (whatever is making API requests) requests data from the web API. Based on its content, the API does some work and returns a response.

Web API’s are useful because just about anything can use them: web applications, mobile apps, IoT devices and more.

Web APIs are useful precisely because they act as an authoritative source of data and services that can power any number of public or private apps and devices.

A Web API is a Web API because it sends and receives data over what we call web protocols. These are the same communications channels your web browser is using right now to request and render this web page.

Why is this important?

It means that any device with an Internet connection can use your API.  In other words: pretty much everything.

Web APIs connect your data to the world by providing it over protocols the world is already using.

Web APIs send and receive information in all sorts of different formats including XML, JSON, and SOAP. What matters isn’t as much the specific format, but that the format is well-defined and available to API consumers.

Formats are made available either through API documentation or in some instances, by implementing a self-documenting API.

Because Web API’s use open and well-documented message formats most programmers already understand, developers can quickly build software to interact with them.

We’ve now described web APIs by dancing around the technical jargon and ignoring the term API. Let’s quickly address what.

What is an API?

API stands for Application Programming Interface. An API is an agreed-upon protocol for interaction between software components.

Small components built to do specific tasks are composed to create more complex solutions. Often these pieces are moving and changing. Modern software components are often in constant communication with one another which adds to the complexity. Sometimes those elements are part of the same program running on the same CPU. Other times, they’re not even on the same continent.

To prevent our modern software-driven world from collapsing like a house of cards, developers define interfaces (APIs).

APIs allow applications and software components to change over time without breaking compatibility with other components that interact with them.

Web APIs can be useful to all types of organizations regardless of type, size, or financial situation. API’s can be simplistic data providers or complex systems that drive manufacturing processes.

Below are just a few examples of companies you might have heard of that have successful APIs.

Twitter is a popular social network. Twitter provides an API that can be used to search Twitter, post, reply, and more. By leveraging an API businesses can efficiently manage their social outreach, research social marketing trends, etc.

GitHub is a popular Software as a Service vendor who hosts software code repositories in the popular Git repository format. Millions of developers and open source projects use Github. Github’s API can be used to automate repository management, search for public repositories that meet specific needs or to research trends in language and technology development.

Quickbooks is a popular accounting package available in desktop and online versions. Quickbooks provides APIs for most versions of the software. The API makes it easy to automate your accounting tasks by automatically submitting online orders to Quickbooks, or get more in-depth reporting on your financial data.

The United States Government offers hundreds of API’s that can be used to query and research public information, such as census and climate data.

Catalyst Fabric Solutions is a make-on-demand fabric printing company. An API drive’s Catalyst’s business model: it accepts customer orders for products such as customized pillows and blankets and automates the rest of the process from production to shipping to billing.

There are hundreds of free and open APIs available to explore on the Internet. This list is a terrific starting point for exploration of free web APIs that you can use in your projects.

Do I Need a Web API?

There are a variety of reasons your organization could benefit from a Web API. These include automation, efficiency, interoperability with partners, marketing, and more.  Would a Web API help move the goals of your organization forward?  Contact Reich Web Consulting any time. We’d love to help.